How to understand OPD diagrams

Optical Path Difference (OPD) diagrams are the modern method of describing the performance of optical systems (especially regarding the colour correction of the optics).
Unfortunately, many manufacturers still publish “classical” types of diagrams to describe their products. The most usual examples are spot diagrams and “colour curves” showing the focal length of different zones of the system. These diagrams are no longer optimal for modern optical systems.

The above mentioned diagrams were suitable in the age of achromatic lenses and first generation (i.e. Kurz-Flint based) APO systems, where typical focal ratios were in the F/15-F/20 range. For these focal ratios, the non-linearities (i.e. contradictions) between the classical optical methods (based on the “ray” model of light) and modern methods (based on the wave-nature of light) only shows negligible differences.
With the advancement of technology and introduction of modern (CaF2) based glasses, the situation changed dramatically:
– focal ratios became much shorter, F/6 – F/7 being the “industry standard” today
– above mentioned “contradictions” increased exponentially with the change of focal ratio.
In the meantime, more precise measuring methodology became widely available, as personal computers, high-resolution image sensors and inexpensive solid-body lasers became common. Taking into account today’s focal ratios (and colour correction requirements) the contradictions between the classical and the modern optical approach became significant, resulting in visible differences during lab measurements and also visible difference in the eyepiece.
In fact, if we construct a fast triplet APO lens of F/6 focal ratio and the optical design is optimized for the “best looking” spot diagrams, then after actually building the lens and testing it under the sky, the image quality will not be optimal. This is not surprising, as the classical method cannot be used for optical systems approaching (or at least getting reasonably near) the diffraction-limited quality. Today we expect better than diffraction-limited performance everywhere between the blue and red colour wavelengths, so, the classical methods (that can’t explain why we see an Airy disk surrounded by diffraction rings in the eyepiece) cannot be used anymore. This methodology was perfect to design car headlights, room lighting and slow focal ratio achromat lenses and (judging by today’s standards) semi-APO lenses. But it is not usable to construct modern, fast APO systems.
The only way to resolve the above contradiction is use a better model for optical design. The wave theory of light is ideal for this purpose and we must use this model exclusively to construct, build and measure modern APO telescopes. Consequently, the diagrams published by manufacturers should also be based on the wave theory of light, as with OPD diagrams. This is why we must use them for modern APO systems.
How can we build a “perfect” telescope based on the wave theory of light?
According to the old optical model, an objective lens was a device that refracted light “rays”, i.e. “directed/bent” them into a single mathematical point that was called the “focus point”. Within this model, we could calculate the focal length of every zone of the lens for every colour (“colour curves”) and we could individually calculate where an incoming “discreet ray of light” would hit the focal plane, and by plotting these points for different wavelengths we could construct a spot diagram.
Using the wave theory of light, the telescope operates on a different basis. We consider light as a wave that approaches the front surface of the lens. If the object is at infinite distance, then the incoming wavefront can be considered as a perfectly flat wave. Using this correct model, the perfect telescope is a device that converts flat incoming waves into perfectly spherical waves. The centre of the spherical wave is the focus point. This explains the Airy disk shape we see.
The better this conversion is (for chosen wavelengths) the better an image is formed in the focal plane.
The (commonly used) Strehl ratio of a lens can be calculated by comparing the actually formed “nearly spherical” wavefront to a theoretically perfect spherical wave. If there is no difference, then the Strehl ratio is 1 and the lens performs to the theoretical standard. But in practice, differences invariably appear, i.e. “wavefront deviation” in an actual system, due to manufacturing tolerances, heat contraction, etc. More errors in the actual wavefront, will result in a lower Strehl ratio of the lens, and the lower the Strehl ratio is, less sharpness and contrast an image will have in the eyepiece.
This is a different approach compared to the “old school” optical methods, but this method actually works in practice. As a matter of fact, this method can explain everything that we see in the eyepiece. For example:
– the formation of the Airy disk and the diffraction rings is elucidated,
– the effect of central obstruction is finally explained
– the image quality we see in the eyepiece perfectly matches the simulations based on wave theory
So, to measure the precision of this wave-conversion, we should analyse the discrepancy , between the theoretically perfect (spherical) and the actual wavefront. Their disparities are wavefront differences.
If the incoming light is to be considered a perfectly flat wave, then wavefront differences are caused by the internal Optical Path Differences of the system. In order to describe how a lens system behaves in a given wavelength, we have to check its OPD diagram for that specific wavelength. By plotting Optical Path Differences for several wavelengths, we can see how the lens behaves in all these colours, and from this point we know how this lens performs (on the optical axis).

When spot diagrams can still be used?

If a lens is corrected for off-axis lateral colour and off-axis coma (and this can be expected from any modern lens) and if the lens members are in one group (Petzval-like systems are excluded), then performance at the edge of the field is mostly independent from the actual design of the lens. No matter if the lens is air-spaced or oil-spaced, no matter if it is a doublet or a triplet, the performance will be (mostly) similar at the edge of the field, as long as the size/focal ratio is similar. For this reason, publishing off-axis diagrams for objective lenses is hardly justified, as what we would see in them are mostly off-axis astigmatism (native in systems where the members are in one group) and field curvature (also a native aberration).

Consequently, focal plane correctors (that correct both off-axis astigmatism and field curvature) are mostly universal devices, and only the focal length of the lens needs to be taken into account when choosing one. As in this case, off-axis performance mostly depends on the design and quality of the corrector, and for these correctors (and not for objective lenses) the publication of off-axis diagrams would be reasonable.

Furthermore, it is rather rare that a corrector would have diffraction-limited performance at the edge of the field, so, an APO lens with a field corrector is generally not a diffraction-limited system. Accordingly, the usage of spot diagrams is somewhat useful for showing the performance of a corrector (and most customers can easily interpret a spot diagram, as they have been commonly in use for many decades). Except for such cases, spot diagrams are not useful for modern APO telescopes.

How to interpret OPD diagrams

On the horizontal (“X”) axis of the OPD diagram, there is the diameter of the lens, i.e. left side of the X axis can be considered as left side of the lens.
On the vertical (“Y”) axis of the diagram we can see the actual Optical Path Difference. This is usually measured in “lambda”, i.e. the wavelength of light. Differently coloured curves usually mean different wavelengths.

If a lens is theoretically perfect in a given colour (e.g. our aspheric figured lenses in green colour wavelength) then diagram corresponding to this colour is a straight horizontal line that doesn’t deviate from the “0” value in the Y direction, meaning that the curve runs flat along X axis. 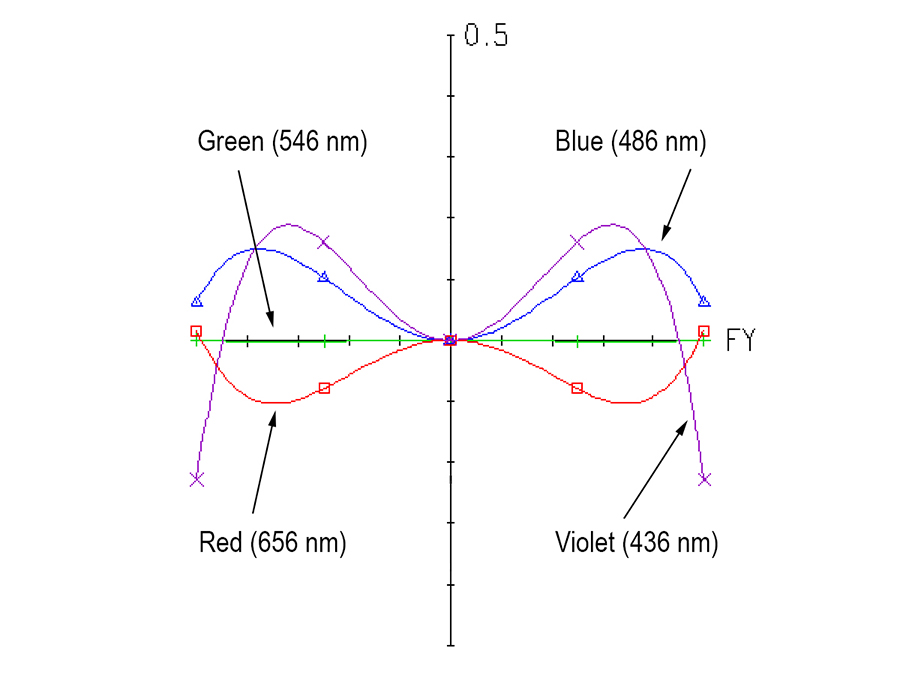 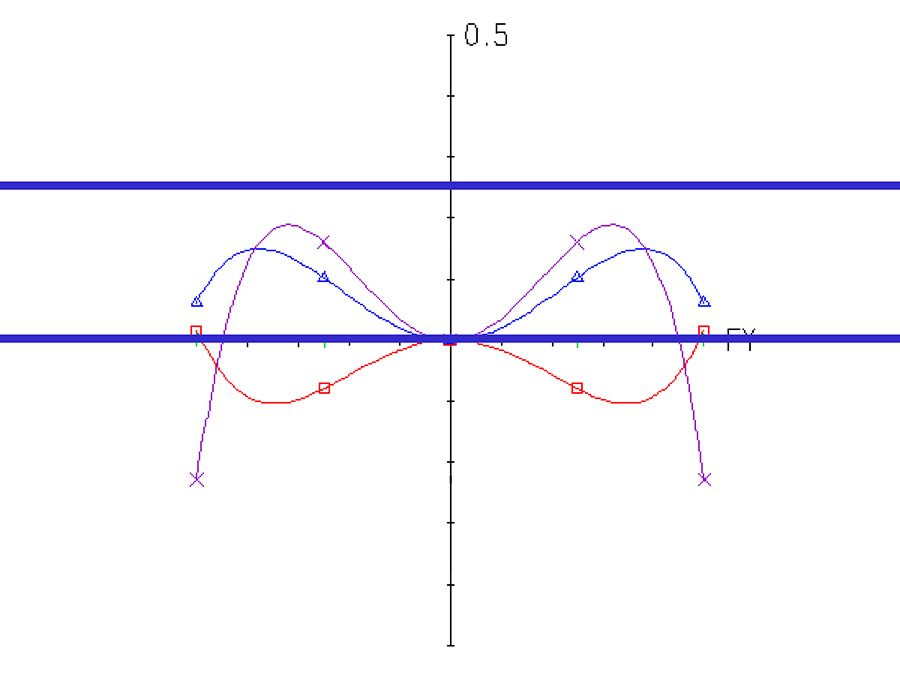 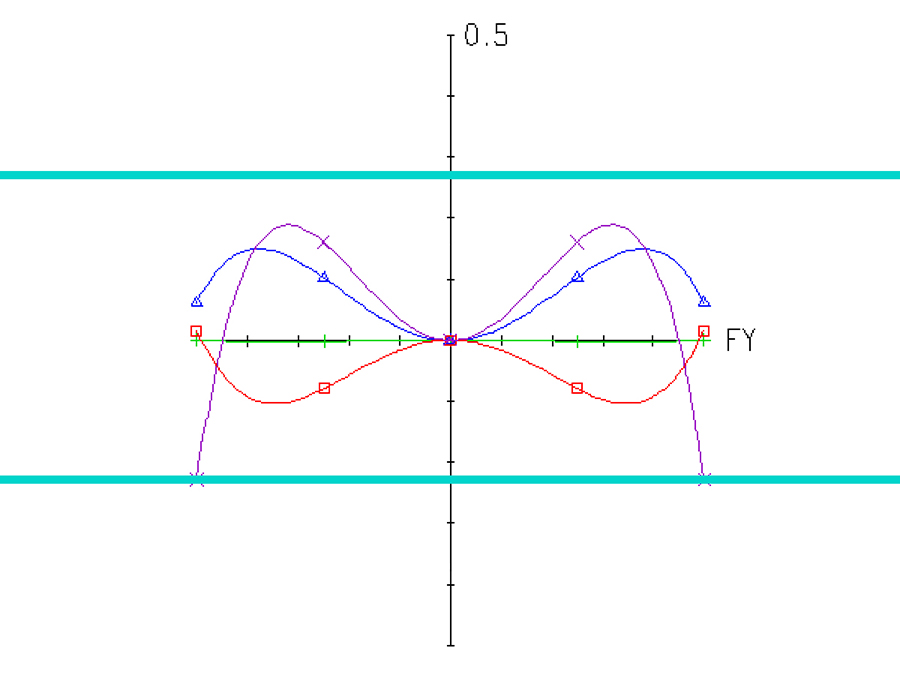 The modern definition of apochromatism sets minimum values of Strehl ratios in different colours, as it’s performance requirements for colour correction. The Strehl ratio cannot be directly seen in the OPD diagrams, but, as modern lenses (mostly) have spherical errors in blue/red colours and “clean” spherical aberration can easily be converted into Strehl values, a good approximation is to check the OPD diagrams for these parameters:

Fulfilling these requirements does not (yet) mathematically prove that the given lens matches the APO definition. The Strehl values need to be verified in order to do so, but they can be easily estimated by simply looking at the diagrams. Matching these requirements already proves that the lens is minimally close to matching the APO definition. In other words: the difference of such a lens from a “proven APO” is mostly theoretical.

For the sake of making this easier to understand, we marked the lowest part of the blue OPD diagram of an 80mm lens in the Fig.2 . The lower blue line is placed at the lowest part of the blue diagram (in the middle of the lens) and the top blue line is drawn at 0,25 lambdas above the first. As the actual blue OPD diagram of the lens very easily fits between these limits (in fact it stretches vertically to only about half the limit), the lens looks like a highly colour- corrected lens that has parameters significantly exceeding the requirements of the APO definition. The Strehl calculation shows about 94% Strehl for this lens, both in red and blue colours (this is well above the required 80% limit), in conclusion the lens is really a highly corrected APO.

If we check the performance of the same lens in violet colour (Fig.3), then we might note that the performance is still better than the 1/2 lambda limit, but the deviations in this colour approach 80% of the allowed limit, unlike the roughly 50% we have seen in blue colour. This is natural for such fast (F/6) lenses but fortunately the lens seems to be a real APO even in violet. As the Strehl calculation shows about 58% Strehl, this “quick check” method seems to be working again.

The OPD diagrams we publish are based on a given melt of actual optical glass, i.e. on the measured glass parameters we received from the glass melting company. Some other manufacturers publish diagrams based on glass catalogue values, which is also a viable approach. But there is a caveat concerning every lens manufacturer:

The variations of glass from melt to melt are actually of a much larger magnitude than “by design” optical errors of modern lenses. In other words, every batch of lenses (built from a consequent melt of glass) must be “tuned” to match the optical parameters of the actually used glasses. This necessitates effort, the creation of additional tools and time. Some manufacturers prefer to save money and time by not tuning colour correction of the lenses, using “generic” tools and hoping that colour correction will still be acceptable , which does occur in most cases. These lenses will show different colour correction from batch to batch. This might be acceptable for cheaper APOs using less advanced glasses (with lenses that won’t match the APO definition anyway, but if we want to have really colour free images, then we do not only have to look at theoretical performance or glass recipe, but we should also check how tightly the manufacturer can measure and control colour aberrations. Building multi-colour interferometers has become more feasible in recent times, but a manufacturer without such a device could hardly provide lenses with identical colour correction.